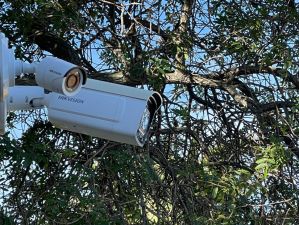 The WCID business plan made provision for six fixed Licence Plate Recognition (LPR) cameras to cover the main throughfare in Welgemoed. The planning and costing phases of this project is complete, while the acquisition and installation are planned for June 2021. The three intersections that will be covered are Eksteen / Jip de Jager, Jip de Jager / Kommissaris, and Jip de Jager / Jameson-Mara in both directions.

An AcuSense camera has intelligent video analysis technology based on deep learning algorithms which detects targets and classifies them into human, vehicle, and other targets. It helps to produce reliable alarms for users and negates the continues monitoring of a screen for movement. Alert alarms are monitored for more effective surveillance by the control room officers.

With the ongoing efforts to keep the WCID’s eastern border to the Door De Kraal-dam and Transnet land towards Willowbridge clean and to manage the pedestrian traffic into our area, the Gazania community that walk daily patrols have raised funds to contribute towards camera surveillance infrastructure. WCID is supporting this drive and will partially fund and incorporate the three surveillance points into our monitoring control room. All the cameras planned for the location will be AcuSense cameras.

Cameras for future gates in the fencing projects

The fencing projects make provision for various gates to allow for pedestrian traffic through the Welgemoed CID area. The gates will be managed by the public safety teams with locked times during the night. The gates will be monitored with cameras during the day to allow an oversight of pedestrian movement through the area. The camera project for the fences will be fast tracked to coincide with the earlier than planned installation of most of the fences. Estimated costs are well within the budget provided.